As part of our news series, we’ll be interviewing prominent figures in astrobotany and their role in advancing the subject forward.  Our second interview is with Dr. Gioia Massa, a NASA Life Sciences Project Scientist based at the Kennedy Space Center.

Our interview started with the same question we ask all astrobotanists: How did you get started with growing plants in space?

A Florida native, Gioia Massa begins by recalling a childhood rich in plant life. For her, botany isn’t just a job, it’s part of her family legacy.

“I planted my first tree when I was two,” Massa said. “I grew up in central Florida in a small town, so there was a fair amount of land for plants. My mother and grandmother were both gardeners. They had beautiful gardens… My grandmother loved gardening. We would always buy grandma plants for her birthday and help her plant things.” 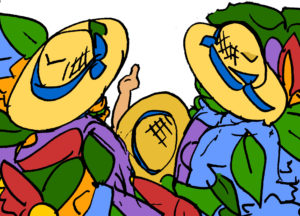 Given her early experiences with horticulture, it seemed fitting Massa chose a career path in botany. What makes her story even more unique is how early she was introduced to the possibility of growing plants in space.

Massa’s school was involved in the Energize the Green Machine project, a partnership between Disney’s “The Land” at Disney Epcot and NASA to bring the subject of astrobotany into the classroom. In high school, her FFA teacher Eugene Dulac was selected to participate in this program, which inspired him to bring the subject to the forefront of his student’s minds and subsequently inspired students like Massa.

“It was the 80s, so for him to document things for his students, he actually had to carry a camcorder with him,” Massa said. “He just had so much passion and energy when he taught.”

Massa describes Dulac as someone who truly inspired her, and mentioned that he was recognized for his work with several “Teacher of the Year” awards. She saw how Dulac adamantly believed in the importance of teaching as a tool for learning and sought to mirror that by teaching others.  In middle school, her and her fellow students traveled with her teachers to elementary schools and taught younger students how plants grow in space by using toys as a model for demonstration.

During high school, she built a hydroponics system to grow tomatoes. When she ran into a problem with her equipment, she reached out to an expert in the field: Dr. Raymond Wheeler at NASA. Wheeler responded to her by mail.  It’s a letter that Massa still has.

Throughout her undergraduate and graduate career, Massa stayed focused on spaceflight plant biology. At Penn State, she worked with Dr. Simon Gilroy and contemplated how roots grow in response to gravitational stress.  Massa pioneered the barrier assay, a plant biology experiment that involves testing how roots respond to barriers. After her time at Penn State, Massa moved into a postdoctoral position at Purdue, where she studied advanced life support with Dr. Cary Mitchell, who she cites as a great mentor. “He was, and still is a huge influence and inspiration to me.” Massa says.

Finally, Massa returned to Florida where she started at the Kennedy Space Center as a postdoc and eventually came into her current position as a NASA Life Sciences Project Scientist.  Her work has since then expanded into astrobotany outreach and citizen science.

One of her largest projects has been a collaboration with Fairchild Garden on a massive educational and citizen science project called Growing Beyond Earth.  Over 150 high schools and middle schools test factors that influence plant growth in this huge data project.  Two Fairchild crops, dragoon lettuce and extra dwarf pak choy, will be a part of a new crop validation test on the International Space Station.  In addition to the research, each school prepares science related tweets to bring exposure to their work.

Massa is optimistic about the future of astrobotany and the important role that life support will play in the future. She believes that this is a difficult challenge that will need to be addressed.

“Integration in life support is the hard part. We have the pieces, but closing the loops is tremendously challenging. There are still way more questions than what we have answers for,” Massa said.

“I think back on how I got involved.  That’s what gave me my inspiration and passion to do this,” Massa said.