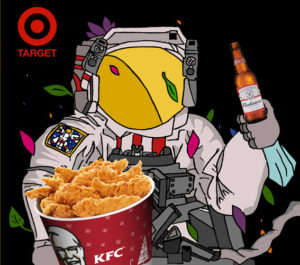 It’s never too early to start investing, and companies are already starting to expand their portfolios for astrobotany.  There are several good reasons for corporations to invest in growing plants in space.  It’s also worth noting that the companies we’ll be looking at today are all household names, whose products have nothing to do with space.  The three examples we’ll take a look at below fall into three different categories:

In July of 2017, Target announced that it was sponsoring the ISS Cotton Sustainability Challenge.  The challenge’s goal is to use the ISS’s research capacity to work to make cotton farming more sustainable.  This joint venture between CASIS and Target is set to test the limitations of the ISS cultivation.  Up to $1 million is up for grabs for researchers studying cotton in space.

The thought process here is thorough.  One way innovation can be achieved on the ISS is that lack of space, diminished access to water, and stressful conditions can drive unique solutions.  In addition, if genetic analysis is done, we may gain valuable insight on what happens to cotton at a molecular level.  This corporate sponsorship is a great example of how astrobotany research can be applied to terrestrial agriculture.

I’ve included the KFC Zinger Sandwich mission on this list because it was too good not to include.  While the investment wasn’t actually in growing a plant in space, the zinger sandwich they launched on a balloon had lettuce on it.  The KFC sandwich was 17 hours into its journey when a leak cut the 4 day venture short.  Although no scientific data was obtained, KFC supported the project with an immense amount of advertising and promotion.  Let’s send sandwiches into space.

Budweiser is planning to send 20 barley seeds on SpaceX CRS-13. The beer giant is interested in seeing how microgravity and spaceflight environments will affect barley.  In fact they’re even considering how the whole brewing process will work in space.    The seeds were supposed to go up on Monday, December 4th, along with the Gilroy Lab’s Arabidopsis thaliana experiment, but the launch has been scrubbed for unspecified reasons.  The next target is Friday, December 8th, but we’re hearing reports the launch could be delayed until 2018.  Looks like we may be waiting on those cold ones in space for a bit.