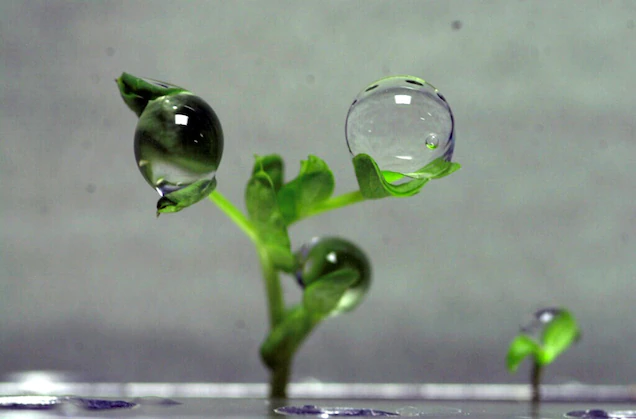 In weightless environments, water tends to form a sphere. Without gravity to tug it downwards, water can remain suspended in the air, and bubbles can stay suspended in the water (see image above). Gravity is not pulling the water down because there is no “down”, and air bubbles do not rise upward, because there is no “up”! The natural behavior of water is called fluid dynamics, and it’s the reason why water forms droplets and sticks to plant surfaces when in a weightless environment. Fluid dynamics can cause some very complicated challenges when we consider how astronauts should water plants in space.

On our home planet, we take watering plants for granted. To understand how soil works, let’s take a look at soil close-up. Soil has two vital components: the soil particles, and the gaps called “pore space” around the particles. When water moves through the soil, it is moving in the pore space around and between the soil particles. Pore space also includes pockets of air, which are vital to plants and soil microorganisms. Since root cells still need to “breathe”, the plant needs these small air-filled pore spaces to survive. Here on Earth when water floods the soil, its pore spaces get filled up with water–leaving no room for the air–and the plant cells can’t “breathe” so they slowly die. 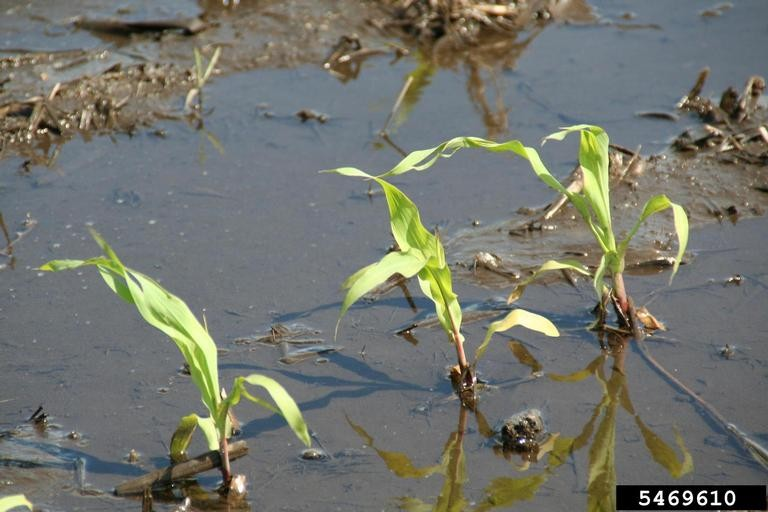 These corn plants are flooded, so their roots are not getting enough oxygen. If the water doesn’t drain away soon, these plants could die.

We have the same problem up in space. Since water is “sticky” in space it often coats plant tissues, which can prevent the plant roots from “breathing”. On the other hand, if the water droplets stick to other surfaces and not the plants, the plants will dry up and wither. The challenge for us is to achieve that “goldilocks zone”–not too little water, not too much water, just enough to grow healthy plants. 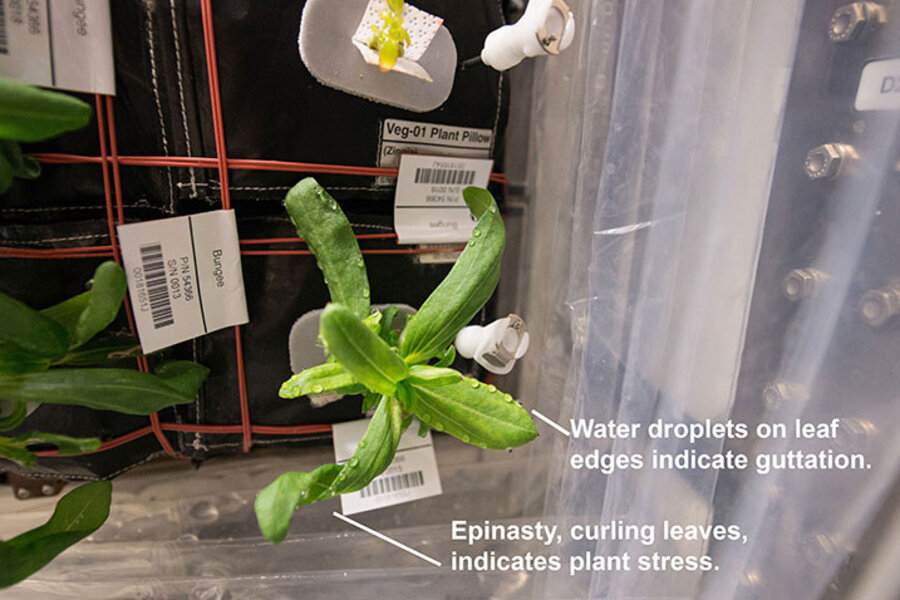 This is what happened when there was too much water filling up the “soil” during the Zinnia experiment on the ISS in 2017. The plants were getting too much water, and they responded to this stress by sucking up excess water and excreting it as droplets onto their leaves—a process called guttation. But despite this coping mechanism the plants were still stressed, so their leaves grew in abnormal curling shapes (called epinasty). To add insult to injury, the wet environment was perfect for fungi, and fungal colonies started growing on the plants! It was a close call, but luckily astronaut Scott Kelly was able to save a few Zinnia plants. But in the future, when astronauts may depend on growing plants for their food, it’s important that we never face this major issue again.

Today, many people around the world are trying to solve this “watering plants in space” issue. Over the years, plant growth chambers have tested various irrigation methods (like the ED-61/62’s jello-like auger media, the Oasis’ “bag of ion exchange resin beads” and the PEU’s rockwool with automated irrigation), but none of these methods have been foolproof. Recent efforts testing new watering systems in space include the APH watering system, where pumps regulate the water pressure and only apply water when necessary, and the PONDS system, which exposes roots to some water and some air. NASA is also investing money in research into new space watering technologies. They recently launched a competitive grant called Appendix Z, where scientists are paid to compete with each other to develop their best ideas for watering plants in space.

Hundreds of people have worked on this problem—people of many ages and backgrounds, from different regions of the world, with different strengths and weaknesses. Part of why this problem is so exciting is that it is unsolved, and anyone, from anywhere, might be able to solve it. Who knows, you could be a part of the next big watering breakthrough! If you have a good idea you’d like to share, please look for opportunities to get involved on our opportunities page, and/or post your ideas yourself on social media.