For the first time, NASA astronauts are growing Española chile peppers aboard the International Space Station. This past week, photos were shown of the recent white blooms of the pepper plants, signaling the hopeful start of the first fruits grown in space!

Since June of this year, “Española Impoved” chile peppers have been growing in NASA’s Advanced Plant Habitat aboard the International Space Station, making these peppers the very first fruiting plants to be grown in space. The peppers are being cultivated and monitored by both NASA astronauts aboard the ISS, as well as a diverse research team from NASA Kennedy Space Center. This research team is made up of both NASA and contracted scientists specializing in space-crop production.

Over the past week, NASA has made various statements through social media and the official NASA.gov website about the growing pepper plants. The plants have recently come to bloom small, white flowers.

These little flowers indicate a key stage in the plants development. Following the flowering phase, the petals usually fall and a fruit develops in the area where the flower once was.

To date, this of one of the most complicated plant experiments to be conducted in space due to the plants long germination and growth cycle. The peppers will grow for a total of 120 days. Astronauts will harvest the peppers in late October as well as in early November. After harvesting, the astronauts will get a chance to taste test the spicy peppers before sending the rest down to Earth for analysis. This study will continue to add to NASA’s ongoing research into growing food crops during long-term space missions. Specifically, NASA is interested in gaining a deeper understanding into how crop plants can supplement astronaut diets with essential nutrients such as Vitamins C and K.

“I loved getting my hands on the pepper plants and pollinating them! I felt a much higher-than-usual level of focus compared to tending plants on Earth. Of course I played Red Hot Chili Peppers for them!” Originally tweeted by Megan McArthur (@Astro_Megan) on September 14, 2021.

See why we are growing this complicated crop: https://go.nasa.gov/2YN8baW 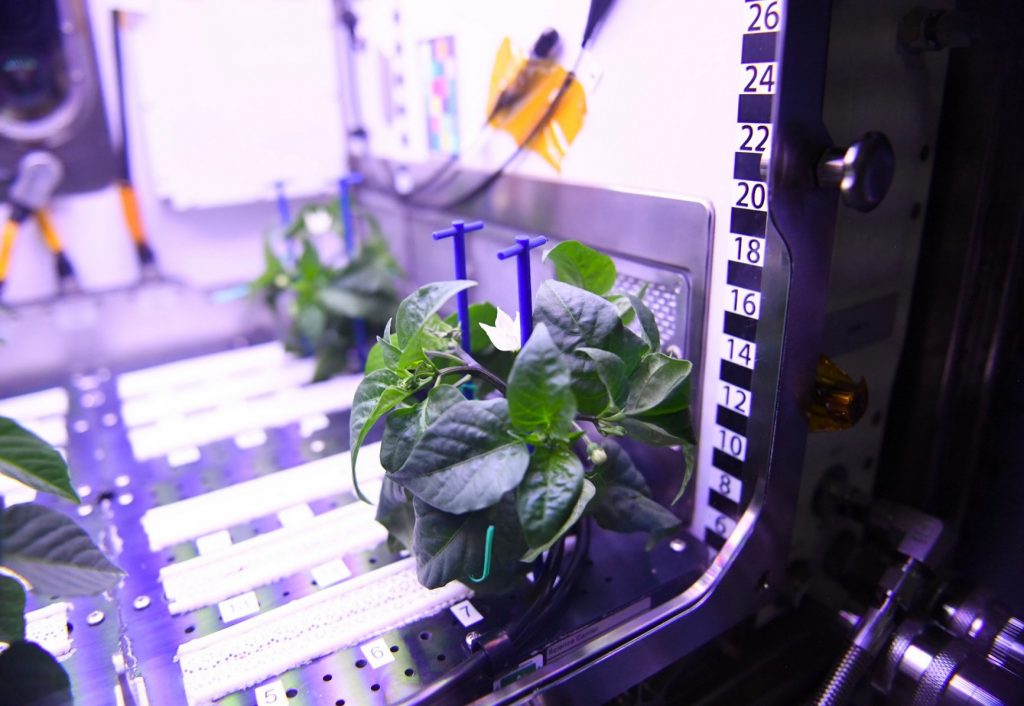 “It is one of the most complex plant experiments on the station to date because of the long germination and growing times,” Matt Romeyn, principal investigator for PH-04, NASA

Why spicy peppers, and why grow them in space?

For more than 20 years, NASA and its international partners have worked hard to provide innovative solutions to challenges associated with keeping crews healthy and fed in low-Earth orbit. However, the majority of crew diets have consisted of packaged food with a bit of fresh food when available. This food was often times delivered as part of costly resupply missions. As crews prepare for long-term space missions to the moon and Mars, frequent resupply missions will become comparatively less feasible.

As missions move beyond low-Earth orbit, to the moon and especially Mars, keeping crews fed will prove to be a logistical challenge due to various factors; such as the cost and time required to deliver supplies beyond low-Earth orbit. These resupply missions would rely on more propellant for the longer travel times, in addition to the costs associated with craft production. In addition, after long periods of storage, packaged foods start to degrade. This ultimately leads to a reduction in key nutrients such as Vitamin C and K in foods meant for crews.

In order to find solutions to this challenge, NASA has been targeting specific crops for future growth in space in order to supplement crew diets. In total, since 2015, astronaut crews have researched and eaten no less than 10 different crop plants aboard the ISS. In addition to the nutritional benefits of the availability of fresh produce, variety is introduced to crew diets. Researchers are also investigating the potential positive effects that seeing, smelling, and caring for plants in isolated, closed loop environments may have on the psychological well-being of crews during long-term space missions.

These particular peppers were selected for this experiment for several reasons. One of the main reasons was that chile peppers, like the ones growing on the ISS, are an excellent source of Vitamin C. These plants are also capable of developing in harsh environments, giving them a good chance to successfully grow in microgravity. Pepper plants are also self-pollinating; this makes it easier to grow fruits as it only requires slight agitation. These spicy peppers are pick-and-eat crops that do not require any special preparation after harvesting, meaning crews can enjoy them soon after picking. Last but not least, they pack heat! These little peppers are considered to be mild according to their Scoville rating, which ranges from about 2,000-4,000 Scoville Heat Units. This puts them at a range that can be enjoyed while also reaping the benefits of capsaicin.

One of the interesting areas that will be monitored during this experiment is how microgravity affects the overall heat of the peppers. On Earth, the environment in which spicy peppers grow can affect how spicy they truly are. This is especially true as it relates to the amount of water the peppers receive during development. Microgravity is an environmental stressor that these plants are encountering for the first time. This could lead to interesting results in terms of flavor. A portion of the data collected during PH-04 will include feedback from crews about the flavor and texture of the peppers. Scoville levels will also be compared between those grown on orbit and the ones growing at Kennedy Space Center. Crews will sample peppers during different stages of development. This means they will sample both green and red versions of the peppers.

We are all looking forward to to the official taste tests from the ISS. Until then…