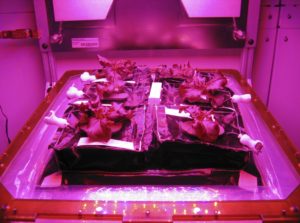 VEGGIE (Vegetable Production Unit) is NASA’s vegetable plant product system currently deployed on the ISS.  It was produced by the Madison, WI based Sierra Nevada subsidiary ORBITEC.  The VEGGIE system was activated May of 2014 and contains a series of LED lights optimized for plant growth.  The goal of the system is to promote spaceflight plant biology research and production of various crops.  In August of 2015, astronauts produced red romaine lettuce for consumption.  There are currently 2 VEGGIE units on the International Space Station.  Plants are grown with root mats and ‘plant pillows’, which are small, wicked pillows that contained calcined clay and fertilizer for the plants to grow in.  The lights on VEGGIE are primarily red and blue light, which are LEDS optimized for plant growth, because they have the highest energy wavelengths.  Air flow and pressure are also controlled in each of the VEGGIE systems.